A progressive club based on traditional values

Our position across the bay from Port Melbourne, has commanding views of the city skyline. The boating calendar kicks off in October with an Opening Day, where members unite to begin the festivities. The event commences with formalities which include the Commodore’s address and the official opening. Past openings have included State Premiers and Senior Naval Personnel. Following formalities, members and guests take to their boats for the traditional sail past and blessing, an ancient tradition, to discourage bad weather and ill seas for the year.

Our facilities are continually improving, with a new Clubhouse having opened in May 2015.

Our 80 berths cater for boats up to 18 metres (60 feet) and offer permanent, casual and visitor accommodation.

All berths have access to water and shore power, plus shower and toilet facilities in the clubhouse. We adhere to the Clean Marina Program. Our participation has resulted in outstanding and efficient environmental controls and security.

Excellent yard facilities are available for members’ boats requiring maintenance and we have access to a modern travel-lift from Savages Wharf who conduct the slipping and launching of vessels.

Hardstand facilities and trailer boat space are both available in the club’s paved yard at moderate rates for members.

RVMYC offers a social experience second to none, for members and friends to enjoy dining in a relaxed atmosphere in convivial surroundings near the water’s edge.

An aerial view of the club in the early 60’s

RVMYC is open to boat owners and non-owners, and provides for both boating and social interests with particular emphasis on family and community involvement.

We encourage responsible boating and promote good boating courtesy. We are committed to fostering traditional skills in watercraft but are a progressive, dynamic Club with passionate members.

One hundred and fifteen years ago fourteen gentlemen met in Melbourne to form a Motor Boat Club. This Club was to form the basis of the Royal Victorian Yacht Club. The RVMYC has been fortunate in the intervening years to have had a continuance of members with great foresight who saw the need for a club specifically catering for the needs of motor boat enthusiasts.

Steeped in tradition and history, this club has always been at the forefront of the Motor Boats Clubs on Port Phillip and enjoys links and friendships of all Motorboat and Yacht Clubs around the bay and beyond.

The RVMYC formed at a gathering at the Port Phillip Club Hotel in Flinders Street Melbourne, three doors from Young and Jacksons on 25 February 1904.

It was resolved by these gentlemen to meet on 4 March for the purpose of forming a Motor Boat Club.

Other foundation members were; A Harvey, Dr. I Blitz, CO Dentry, V Cole, J Myer, A Woods and C MacIntoch of Geelong.

The Club was first called the Victorian Launch Club. This was later changed to the Victorian Motor Boat Club. The club met for some years at the hotel until new premises were acquired at a site near the present ferry terminal at Princess Bridge Wharf.

The opening day of the club in 1904, was held in June and took the form of a cruise down the Yarra River. Among the boats to take part were the Motor Launches, Cingalee, and Nanoya, steam launches, Alvina and White Knight, St. Omer and Peggy.

The first of many races to Geelong was held on 30 January 1909 and was won by Mr Dentry in his boat Iona. Mr G Thomas donated the first prize of 5 guineas. All boats started on a handicap. A resolution was adopted to see that all boats starting were properly equipped with the necessary life belts and and any boats turning back, must ‘wire’ the secretary at Geelong, so as to allay any anxiety as to their whereabouts.

The Port Phillip Hotel served as our Clubrooms till 11 November 1913, when a discussion to have our own rooms at Princess Bridge was agreed.

It was resolved to request the City Council to grant us rooms in the vaults at Princess Walk. Number 6 vault was granted to the Club. The first monthly meeting at Princess Walk was held on 1 December, 1913. 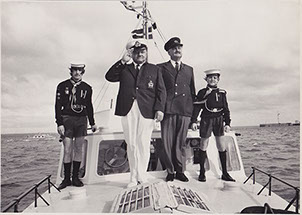 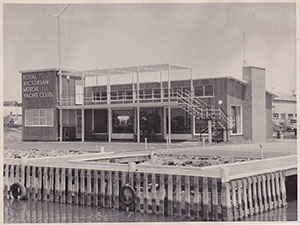 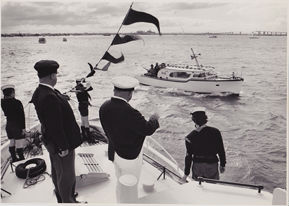 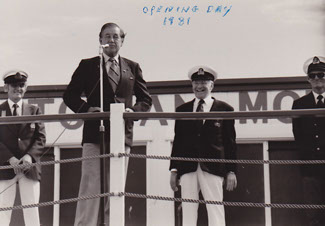 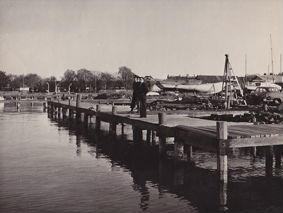 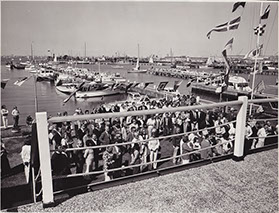 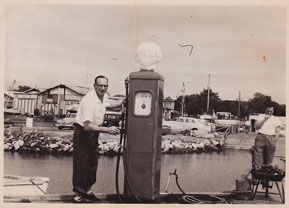 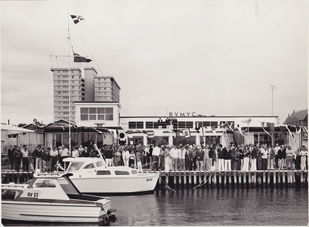 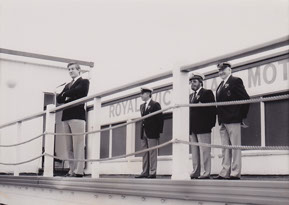 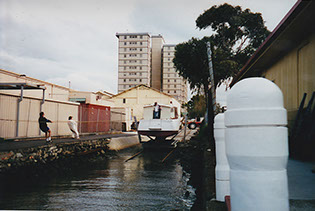 On 18 February 1937, the Club was formally given the permission to use the prefix ‘Royal’.

This marked the opening of the 1937 season, whereby Royal Charter from the Lords High Commissioners of the Admiralty London, the title ‘Royal Victorian Motor Yacht Club’ could be used. For this signal honour, the club is greatly indebted to Mr Charles Marshall, who helped the Club in many other directions.

The club was proud to receive the King’s blessing in granting title, as documentation at the time, he made it clear to the Governor General that in his considered opinion there were too many requests for the Royal Title taking place at the time. In the correspondence granting the club Royal Title form the Prime Minister at the time, JA Lyons, he states;

“The request has received full consideration and in view of the possible usefulness of the Club from a national standpoint in time of emergency it is desired to support the application”.

In 2011 the club marked the centenary of the RAN in a sail past at Station Pier Port Melbourne. The Club has a long history with the RAN, offering operation surveillance activities in Port Phillip, during the first and second world wars.

Thank you for considering a membership to the RVMYC. Membership is open to boat owners and non-owners, and provides for both boating and social interests with particular emphasis on family and community involvement.

As a member, you are entitled to use the club facilities in our new club house, which boasts a Level 1 Members only Club Room, Library and Meeting Room, Private Dining Areas and downstairs an enclosed members BBQ area.

The procedure for Full or Country membership is as follows:

Upon receipt of the above forms and payment, a mutually convenient time will be arranged for an interview. At this interview, you will be given some details on the Club, some of the expectations of members and we will give you the opportunity to ask questions.

At this meeting, you will need to bring:

Nominations for Membership will then be displayed on the Club notice board for 14 days as required by the Club Constitution. Nominations will then go to the next General Committee Meeting for approval. After approval, you will be notified of the result and your membership card and key will be forwarded to you. In 2017 the BHPP was introduced to encourage non-active berth holders to become more involved in the Club by participating in boating and/or social events.  It was designed to be simple to understand, easy to manage, clear, concise and transparent.  Members who have a marina berth and are not active in the Club pay a loading on their marina fees on a sliding scale, based on the amount of their club participation, currently up to a maximum 20% above their ‘Club Rate’ (standard fees charged for a berth).

Berth Holders are required to accumulate 10 points throughout a 12 month period to retain their entitlement to the Club Rate for the following 12 months.  For every point not achieved by a member (out of the 10 points required), his/her annual marina fees increase by an amount equal to 2% of their individual club rate.  It is the berth holder’s responsibility to advise the office of points acquired.  The Committee have the discretion to adjust the program and/or points where special circumstances apply.

Our 85 berths cater for boats up to 18 metres (60 feet) and offer permanent, casual and visitor accommodation.

All berths have access to water and shore power, plus shower and toilet facilities in the clubhouse.

The Club provides excellent marina and yard facilities with access to a new travel lift that operates in Savage’s Wharf adjacent to our club.

Only Members can apply for Club Berths. To apply for a Marina berth, download the Marina Berth Allocation Application Form, fill in the details and sign. Forward your completed and signed form to the Club for processing.

If you wish to apply for a marina berth, the Marina fee is a one-off non-refundable application fee and does not include any berthing fees.

Whilst the Marina Sub Committee does not guarantee a berth, they do try to meet all applications in order of waiting list as soon as a berth becomes available.

If you are a member of one of our kindred clubs or a visitor to our area and wish to book a berth, please complete and sign the visitors berthing request form available from our downloads page, click the link below.

All visitors must provide an Insurance Certificate of Currency with this request.

The Club provides excellent marina and yard facilities with access to a new travel lift that operates in Savages Wharf adjacent to our club. Competitive rates and storage charges are available.

Boats must be booked into our yard in advance, the allocation of space is then managed by the Club in accordance with set rules.

To apply for a yard space, download this form, fill in the details and forward to the Club. Members are reminded that specific rules apply in the Yard, that ensure the safety and wellbeing of all.

Insurance and WorkCover insurance (where applicable) must be provided to the club with your application. Acknowledgment and acceptance of these rules is a requirement for access to the yard space.